3 ways to time travel in Git to undo destructive mistakes

Raise your hand if you can relate:

Me: “Sometimes I fuck up my rebase so badly I delete the repo and clone a new copy 🔥🙆‍♀️”

We've all been there! It's easy to do a well-meaning git rebase or git reset only to find everything broken afterwards. Then, since your changes rewrote history, the only way to go back is to delete everything and re-clone the repository to start over again. I used to do this all the time!

But what if I told you there was a better way? What if you could time travel back to a point before you did those destructive changes without deleting anything? It turns out, git has built-in tools for this such as reflog, ORIG_HEAD, and gitrevisions, and they're surprisingly easy to use! 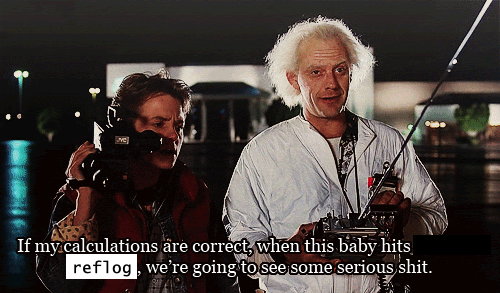 In this article, I'll show you how to use these nifty shortcuts to undo some of those history-changing moves and get back to the proper timeline!

If you only want to read the examples, you can skip to the next section. But if you want to follow along with the examples on your own terminal, run each line below as a command in your terminal to set up the demo repository:

Here's an overview of the starting git history (using the command git log --oneline --graph --all):

There is a master branch with 3 files, each added in a separate commit. There is also a separate my-new-branch branch. This branch also has the first two files, but then splits off from master and has its own third file.

And here are all the files in my-new-branch:

This is the desired state. When we mess it up in the examples below, our goal is to bring the repository back to this state.

Let's say we're on my-new-branch and we rebase onto master:

But Agh! We realize this was a mistake! Maybe the code stopped working after the rebase. Maybe there were some weird merge conflicts during the rebase and everything got messy. Either way, we want things to be the way they were before, but here is what our new git log shows:

...and all our my-new-branch files are combined with the master files:

Apparently, our original commit (6cde040) is gone. How do we go back? We could delete everything and re-clone, but we probably don't have a remote copy of our most recent changes to clone. We could manually create a new branch off the old commit and re-add/delete the files that were there, but what a hassle!

Instead, try running git reflog to see some helpful points in history:

Git reflog shows everywhere our current working HEAD was at, including commits that were removed with destructive commands such as git reset and git rebase. Simply pick the commit before our destructive changes, do a hard reset to the gitrevision number (the one with the curly braces), and everything is reset to the way it was before the rebase!

After running this command, our git log shows us we're back to our original state with the original commits and the original files:

"But Zak," you might say, "that reflog output is kind of confusing, and it's hard to tell exactly which reflog line to go back to."

3. Reset to a relative time

🌟🌟🌟WARNING: THIS IS REALLY COOL

Resetting to ORIG_HEAD is great, but what if we've really gone down a rabbit hole of destructive changes. Let's take the rebase from the last example, and add a few more steps to it:

Why did we do this? I don't know ¯\_(ツ)_/¯. Someone on Stack Overflow probably said it was a good idea, so we tried it on a whim and, well, things got weird:

The commits are all out of order, and we are missing files. How can we undo this??? We made several destructive changes, so ORIG_HEAD isn't going to work. We can check git reflog, but there's so many changes that happened that it might be hard to find the right one. All we want is for our branch to look like it did 5 minutes ago before the changes.

...and afterwards, you'll see the branch in the exact state it was 5 minutes ago:

Yes, you read that right: This command literally tells Git in plain English to return to some time in the past, and Git does it!

The techniques above are powerful, but there are a few limitations to keep in mind:

So, to summarize, here are some ways to fix your repo after you reset or rebase your code into an unusable state:

I hope this helps someone out there! Let me know in the comments if you have any questions or any other go-to methods for undoing git mistakes!

If this saved you time, please help others by sharing on Twitter! If you'd like to show your support, feel free to buy me a coffee. Thanks for reading!